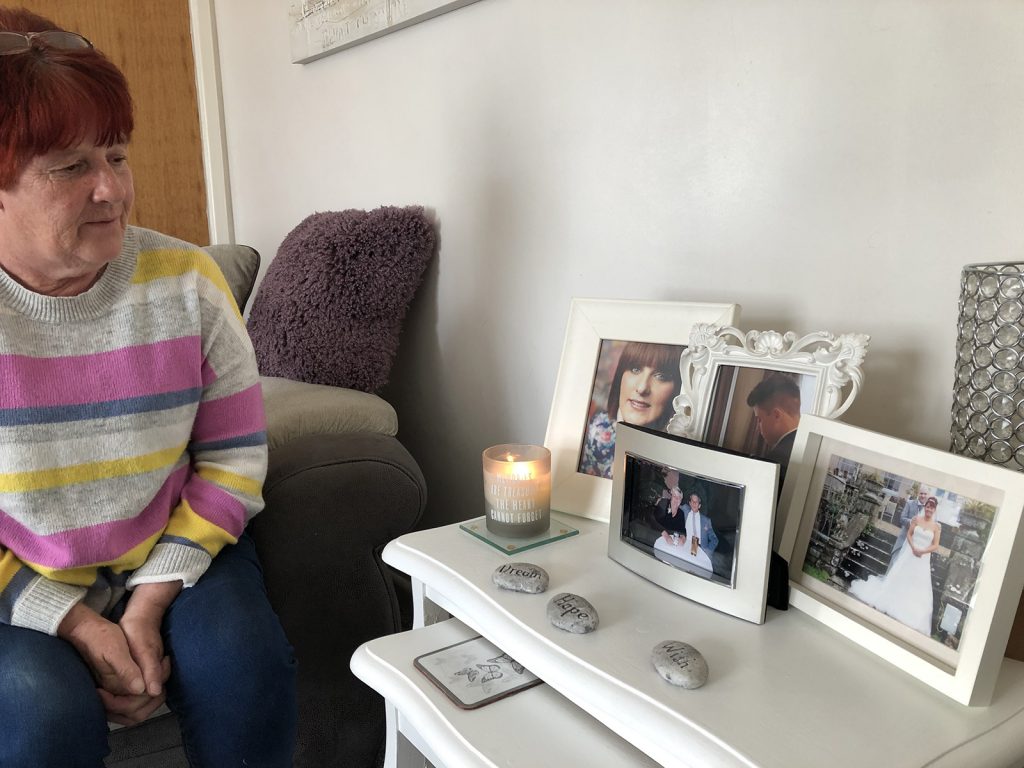 Losing loved ones is something that we will all experience, for Tania Burgess from Ebbw Vale the last 33 years have been extremely challenging following the loss of four close family members. Tania has been able to cope due to the support of Hospice of the Valleys provided. Tania has kindly shared her story in the hope it will encourage others to utilise the support the hospice has to offer. ;

My involvement with the Hospice began in 1986, when my mum, who was my best friend and I did everything with, was referred to the service following being diagnosed with breast cancer. . We were visited and supported by Dr Lammington and Jane Meddlicot who founded the Hospice, we felt as though we always knew what was happening and nothing was hidden from us. Mum was doing well but then sadly passed away in 2009 after being diagnosed with secondary cancer which went to her bones. As a family we had so much support from the Hospice and nothing was ever too much trouble, we felt listened to and Mum was looked after the way she wanted and with the dignity that she deserved. Initially Mum wasn’t happy about strangers coming into her home and looking after her as she was a private person, however, the Hospice staff quickly became like an extended family and she loved everyone who visited. Especially towards the end of Mum’s life when she needed more care I knew I could call at 2am if I had to and staff would go above and beyond.

After mum died we all received the support we needed from the hospice, from filling out forms to helping arrange mum’s funeral, , all the things that are difficult to get your head around when you are trying to cope with the loss of a loved one, nothing was ever too much trouble..

Nine months after mum passed away, Dad was diagnosed with Bowel Cancer and once again was referred to the Hospice. Knowing the care that we had already received we had no hesitation in the Hospice being involved. Whist still reeling from the loss of my Mum and now Dad’s illness nine months later my husband suffered a massive heart attack at home and passed away suddenly. I was still grieving for Mum and at one point I felt so confused and wasn’t sure who I was grieving for, I didn’t know if I was coming or going and emotionally I felt drained. Again the Hospice were there at my side, providing so much support, love and reassurance, I knew they were there for me and it was a lovely feeling.

Dad was later diagnosed with Prostate Cancer but thankfully two years later he was given the all clear. We felt like a huge weight had finally been lifted from my shoulders and that after so much turmoil I could now have some calm.

Sadly the calm was short lived as just six months later we had the devastating news that my daughter Kerry had breast cancer and despite having a mastectomy the cancer had already spread and she passed away at the age of 35, just a year after being diagnosed.

I hate the word Cancer, it has taken so much away from me but I have been so grateful for the support the Hospice has given me throughout. Kerry’s son (my grandson) was just 14 when she passed. Two years ago he was finding it especially difficult to cope with her loss and had reached rock bottom, once again the Hospice Family Support Team were able to step in and give him the support he need, he is now in a much better place and is doing really well – Kerry would be so proud of him and the man he has become, he is now training to be a Nurse himself.

Although I would often talk to friends about how I was feeling they would become upset and I would end up comforting them! I felt like I had spent the last 33 years on a continuous treadmill caring for my family and also loosing those closest to me, but I didn’t feel I had been able to talk about it.

The first session with the Family Support Worker I cried for the whole three hours, I wasn’t rushed or judged and felt like I was talking to a friend, he listened and with each session things have started to get easier. I am given such positive feedback and being told that I am doing well. After such as sad time he has helped me to pull out all the good memories from all the bad ones that I have not had chance to reflect on.

This year I will be 61 and with so much of my life having being dominated by Cancer the Hospice has helped me to appreciate the good and this has made a massive difference to me both physically and mentally.

Dad passed away just before Christmas 2018 but from a condition unrelated to Cancer, the Hospice were such a help again with his care, form filling, power of attorney and the other arrangements that needed to be made.. They really are my extended family and although there is a long road ahead of me, they have shown me that there is hope with the guidance and support they continue to provide.

If I am feeling down I only need to phone the Hospice and they put light into my day, I really could not have managed without them. People suggested I needed Counselling after losing Kerry, Dad was the one keeping me going and I knew I would feel it when he was no longer here. I was struggling to cope but a call to the Hospice and all the support I needed was arranged. They even arranged for me to have complementary therapy as my mental health has suffered badly and this helped relieve my anxiety.

It still hurts……but I am getting there and want to go forward.

Tania feels her loved ones are still around her, at Easter, Christmas and special occasions she makes cakes or decorations with their names on to remember them. Mum was such a strong person with a fighting spirit and I remember her saying that “You don’t die from Cancer, you live with it”.

To celebrate the Hospice Big Bash Tania is planning a fundraiser of her own and will be inviting friends around for a House Party to make happy memories and to remember loved ones whilst supporting the Hospice.