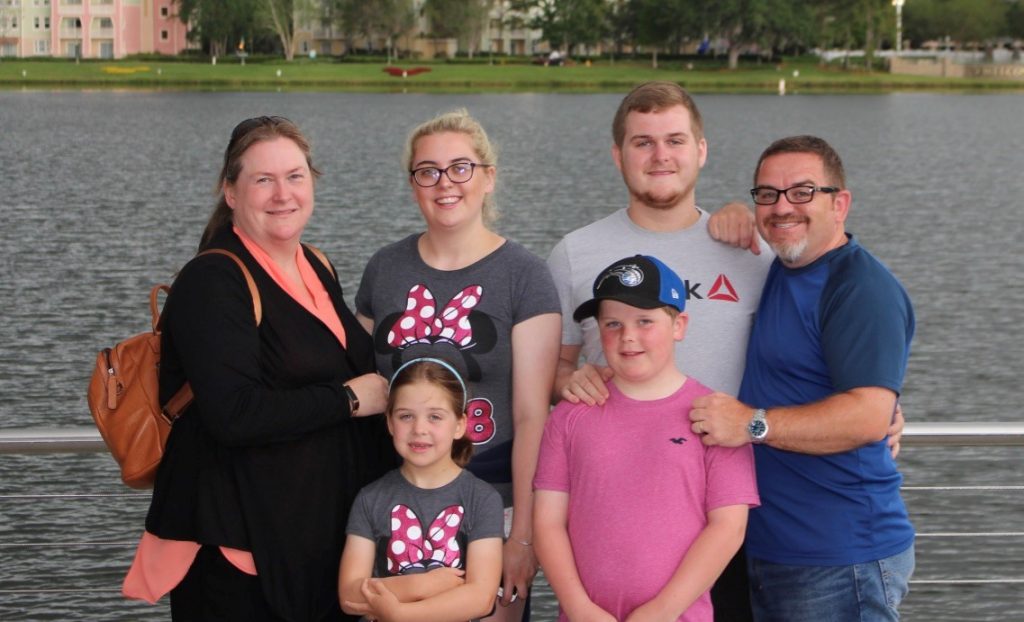 Stuart’s wife Sharon passed away in June 2021. Three years before this Sharon had undergone surgery to treat Bowel Cancer and no follow up treatment was needed.  Sadly, eighteen months later, the cancer returned and this is when Sharon was referred to the Hospice.

Sharon and Stuart were parents to four children between the ages of 10 and 24 all of whom still lived at home. When Sharon’s cancer returned Stuart became her main carer. The Hospice not only cared for Sharon, but also made sure that Stuart and the children had the support they needed. This included early counselling for Stuart and the two eldest children.

“The Hospice were a huge support to me, helping with so many different things. Even helping to sort out Sharon’s medication with the pharmacy, which could be tricky at times. They were also the key link with other agencies within the community and they helped pull everything together, which was such a relief and took the pressure off me” said Stuart.

“The Hospice were my safety net and if I didn’t know what to do, they were always there on the phone to help and guide me”.

The Hospice team continued to visit Sharon and support the family during the pandemic. Following getting Sharon home from Hospital Stuart recalls how he ‘hit a wall’ as he had been sleeping on the sofa downstairs, next to Sharon’s bedside each night next.

“I hit a wall and felt exhausted, the Hospice stepped in and provided support at night, which allowed me to get some sleep and recharge my batteries, this allowed me to spend more quality time with Sharon”.

“We have continued to have support from the Hospice; they provided advice around my finances and what I was entitled to when Sharon passed away. I had no idea about any of this as we had both always worked”

“My youngest also came along to the Hospice to a children’s group bereavement session, this was really good as they could speak to other children and talk about what had happened and it helped them realise they weren’t the only child whose parent had passed away”

Stuart and his family have gone on to be big supporters of the Hospice, recently Stuart took part in the Fire Walk. “It was a great way to give something back for all the help and support they have given me and my family”